Olu (She) by Shaji N Karun 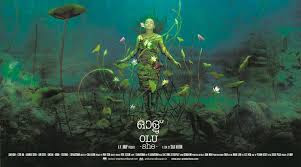 A review by Jaya Prakash Kallikkal

Olu (She) is a film that veers between fantasy and reality. Brilliant Cinematography stringing together varied shades of love, layered at different levels of human mind  creatively translated into a visual treat is the hallmark of this beautiful film.   109mts of pure fantasy unfolds through an intriguing story telling style splashing out onto the screen under the masterly directorial venture of acclaimed Malayalam Film Director Shaji N. Karun .

Titled ‘Olu’, a local slang for She/her, used in northern parts of Kerala is a fantasy drama that rivets around the central theme of love as seen from a male and female perspective.  Shot mostly in the backdrop of turquoise blue backwaters, the story is set in a mystery island in the Arabian sea where a nun turned bodhisattva is believed to have set foot and disappeared under water.  Ester Anil plays the role of Olu (she), a local girl who is raped and immersed under water near the mysterious hanuman island which is believed to be infested with spirits and lost souls.  The protagonist and central character of the film Vasu played by Shane Nigam is a local artist belonging to the island who seems to be a witness to the entire sequence of events that changes his notion and understanding of love.

Belonging to a Panikkar family that owns some of the oldest surviving structures in the island, Vasu struggles to make a living out of painting.  His paintings are often cheap copies that do not earn him much money or respect.  He however finds his life transformed in one of the full moon nights when he ventures alone in his boat near one of the eerie spots in the backwaters.  He hears a melodious voice of a girl who beckons him awakening love in his heart.  Vasu visualizes the girl to be beautiful however his efforts at catching a glimpse of the girl.  While his family consisting of his grand mother, who is a witch craft practitioner herself warns him against his advances professing dire consequences.  Enthralled Vasu despite warning visits the spot on full moon nights and is mesmerized in love and thereafter seeks redemption in his paintings that stand transformed into pieces of art that is widely acclaimed.

Vasu is invited to Mumbai where he is sucked up into the vortex of art world and he falls for his PR agent and secretary and gets physically engaged to her.  He is unable to concentrate in his new paintings as the voice from the backwaters cling to him and beckons him to return.  Vasu visits his hometown to be at the spot on full moon night to communicate with his platonic love.  However he finds that Olu (she) is disturbed and in know of his love and intimacy to another woman.  Changing hues and shades of shimmering backwaters turn gray and Vasu turns into a mental wreck.

Through Olu Shaji tries makes real the essence of love in varying dimensions of human mind platonic, Physical, Real, Esoteric.  Juxtaposition of visual effects in a melange of shades of sea, sky and nature, wizardry of Shaji is immensely felt in the translations he provides through non -verbal means in the film.  Extremely complex psychic situations are anchored in the para-normal shots whereas simple human responses are reflected in characters like Vasu and people surrounding him in real life.

An interesting tryst of Vasu with a group of Buddhist historians who visit the monkey island and their request to him to paint a masterpiece for their monastery is an event that tries to dig a leaf out of the past history of the place and connecting some missing links from the past.
Though some visuals especially fleeting view of blue waters reminds one of Ang Lee’s Life of Pi, Olu is a visual treat as well a movie that sets a mind thinking as to the true essence and meaning of Love. Distinct handling of human psyche and translation of the theme of Love in its vivid proportions through individual and a macro level representation makes Olu a visual treat.

Shaji N Karun is a Malayalam Director of international repute. He is an alumini of FTII (1971) and many of his films including Piravi, Vanaprastham and Kutty Srank have been critically acclaimed.