Hinduism offers answers to innumerable cryptic puzzles of life that are very simple to observe but too complex to gauge through available information in the current scientific system of understanding and research. 1500 year old Chottanikkara Bhagawathy temple situated in the suburbs of Ernakulam in the state of Kerala carries forward the ancient system of ritual worship centred around Goddess Bhadrakali that untangles the web of paranormal and supernatural through mantric practices.  Precincts of this majestic temple exudes a distinct aura and energy field that follows a devotee in and around the temple.

God’s own country, Kerala can also be called a land of festivals, temples and rituals. During a recent visit to Kochi, I was impelled to visit Chottanikkara Bhagawati Kshetram, a powerful devi temple located at 9.9331° N, 76.3911° E, in the suburbs of Ernakulam. Believed to be more than 1500 year old, the temple carries a mystical force around its precincts that dwells around a devotee visiting the temple.

According to legend a forest dweller named Kannappan who practiced animal sacrifice lived in deep jungles where Chottanikkara temple exists today .   To please his ista devata (Bhadrakali or Durga) he used to sacrifice one beast each day. Eventually a day came when he had no animals left for sacrifice except his daughter’s pet calf but his daughter preferred to sacrifice her own life than her pet calf’s. It is then when Kannappan had a revelation and heard his ista devata’s voice which turned out to be the calf he was going to sacrifice. That day Kannappan realized the ultimate truth of life.  The place where Kannappan sacrificed animals to please Bhadrakali eventually became the guruthi kalalm of keezkavu at Chottanikkara temple.  The place is believed to hold immense healing powers that can alleviate people haunted by supernatural spirits or those who are mentally deranged for whom modern medicine offers no answers.

Chottanikkara (Jyotikara) literally translates into ‘One who enlightens. Possessing unlimited powers through manifestation of Mahakali, Mahalakshmi and Mahasaraswati, the temple is consecrated as a deity with multifarious manifestations of energy.  Worship of the deities in this temple is believed to cure even life-threatening diseases. The temple housed in a massive compound placed at two levels.  The higher level comprises of the primary sanctum sanctorum of Bhagavathy and Lord Vishnu besides other deities including Dharma Sastha, Siva, Brahma, Ganesha, Karikeya, Hanuman Swamy and the serpent gods (Nagas). The lower level houses the Keezhu Kavu where another temple of Bhadrakali exists beside a pond (mentioned earlier) where special Guruthi Poojas are conducted to cast away evil spirits out of people or from those who are believed to be possessed by supernatural forces often referred to by the medical fraternity as extreme cases of Schizophrenia or people with mental maladies to whom modern medicine does not offer any relief.

Original Idol of Devi in the main temple is consecrated in irregular shaped red laterite stone that is believed to be ‘svayambhu’ or self-revealed. However, temple priests decorate the idol in elaborate jewels or Gold Kavacha for general darshan.  However, in the mornings, the idol is draped in white saree representing Saraswati, a bright red saree at noon representing Mahalakshmi and in a blue saree in the evening to represent Mahakali or Durga. 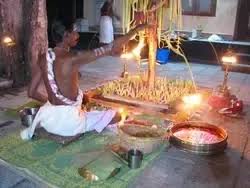 The Chottanikkara Bhagavathy amman (goddess) and the Keezhu Kaavu Bhadrakali amman are worshipped as the healing goddesses.  Interestingly, in Hindu faith, Bhadakali is believed to be the patron goddess of exorcism.  Thus, this temple is a unique blend in shakti worship, which gives a visitor a glimpse of the paranormal activities manifesting in the region through some of the devotees. The temple also has an ancient ‘Pala’ tree (Alstonia scholaris) which has hundreds of iron nails implanted by devotees using their foreheads, who have been cured of possession by malevolent spirits.  The tree is a testimony to the miraculous healing through pooja and darshan at this temple, a fact that can be verified through the rising number of devotees to this temple with passage of time. 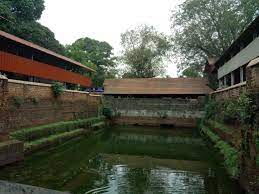 Considering the large number of devotees who bring in their relatives suffering from psychosomatic conditions or Schizophrenia at this temple, makes me believe that this temple is indeed a space that exhibits a higher level of energy that makes exorcism, a science that needs more research and understanding. The above stated medical condition is managed through a ritual called  Guruthi Pooja at Keezh Kaavu pond.  The arena transforms into a supernatural location each evening, where a ritual Guruthi (ritualistic sacrifice) involving chanting of divine verses and offerings in the form of pots (12 in number) is performed using a mixture of turmeric and lime that transforms into a blood red liquid representing sacrificial blood to the Devi.  The sight is certainly not for the faint hearted and can be quite disturbing too, as innumerable devotees suffering from mental issues can be seen turning hysterical during Guruthi pooja oblivious to the presence of other devotees.

Amidst the screaming, wailing and laugher it is a stark silence that makes the entire event leave an indelible mark in the mind of a visitor.  I was alarmed to see a 20 year old looking girl turn hysterical in front of me.   A pretty girl of about 5’2 in height, a body and attire that reflected affluence but a mind that had lost sense of the real.  She had abruptly starting shaking her hands fiercely and an eerie laugher emanated from her lips.  I tried to take my eyes away but my head kept moving to witness her condition.  She was laughing and crying at the same time.  Her relatives (perhaps her father) tried to hold her to prevent any injury but suddenly adjacent to her, another woman started shaking her body violently, as if a chain of hysterical confusion had been set to motion in the arena. The entire place seemed to be in possession of some super natural spirit!

Personally, I find myself to be a believer who tends to tread the path of rationality and scientific temper. A visit to the temple was an eye opener to the fact that supernatural energy and vibrations do affect our physical and mental faculties.  Scientists offer many theories to such occurrences. In Florence, Italy, there have been instances in the early 19th Century when people have been found to faint while taking in Florentine art.  This was later named as ‘Florence Syndrome’ in 1979 by Italian psychiatrist Graziella Magherini who observed over a hundred similar cases among tourists. Similar is the experience of several visitors to the city of Jerusalem who are said to get afflicted by a syndrome which was regarded as a form of hysteria referred to as "fièvre Jérusalemienne".

I would not call this a ‘Chottanikkara syndrome’, as we Indians have our own treatise on spiritualism, occult sciences and temple rituals.  Our Vedas have deep discourses on aspects that cannot even be in the line of vision of modern sciences.  It seems as if the Vedas begin from where scientific research ends its dissertation.  Modern medical sciences offer tangible solutions and remedies to innumerable physical and mental diseases but there are a million other ailments that do not have any scientific answers. Spirituality and temple darshans are perhaps the only succour left in situations where medical fraternity asks humans to have faith in God!

Chottanikkara Bhagawati temple is indeed a temple to be in, if you wish to get into a state of trance and charge your metaphysical energies.  Irrespective of your scientific understanding, do attend the Guruthy ritual that will make you realize that life is truly precious. I believe, Hinduism offers answers to innumerable cryptic puzzles of life, in forms and representations that are very simple to observe but too complex to gauge through knowledge  available in the current scientific systems of understanding and research.

Hinduism offers answers to innumerable cryptic puzzles of life that are very simple to observe but too complex to gauge through available ...