Bamboo is the textile of future 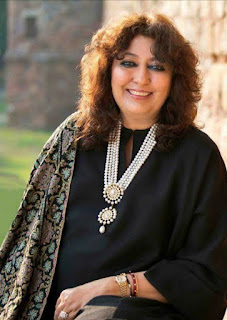 Madhu Jain is a craft revivalist and textile conservationist. Her forte lies in developing textiles in distinctive combinations of variant weaving traditions for creation of new textiles that are high on quality and design. Today she is recognised for her dedication towards the handloom sector. Her work in revitalizing and reinvigorating dying crafts has won her wide appreciation and international recognition.  Her Bamboo silk IKAT weave is the first of its kind in the world.  She has notably indicated Bamboo as the textile of future.

Madhu Jain launched her career in 1987 with a mission to revive the Indian handlooms sector to further the cause of swadeshi.  Her contribution has been in serving the twin functions of adding to the nature fibres and textiles by revitalizing the handlooms industry and assuring livelihoods to the artisans segment.  She did this by combining distinctive combinations of different weaving traditions from two states or regions thus coming out with quality textiles in association with Master weavers.
As an authority on finer aspects of textile crafting, Madhu introduced bamboo as an alternate eco-friendly textile and after putting in 15 years of Research and development, she came out with Bamboo Silk Ikat which is entirely a new kind of textile that is being hailed as the Textile of future.

India with a rich 2000 year old tradition in textiles is unique in many ways.  While designs, patterns and fabrics continuously evolved in various regions through history, innovations and weaving techniques have undergone various changes over the years. Madhu Jain as a specialist in creation of new weaves has experimented with Ikat from Odisha, Kalamkari from Andhra Pradesh/Telengana, Mekhla Chaddar from Assam and Andhra Uppada.  She was excelled in figurative Kalamkari which has been accomplished by incorporation of new features in the traditional craft by use of influences such as Raja Ravi Varma paintings. Madhu also specialises in creation of new weaves and textiles which are organic and hand woven.

India being the second largest bamboo producing country in the world has a big scope in terms of tapping this material as a sustainable and eco-friendly textile material for the future. Madhu’s passion for eco-friendly bio-degradable textiles has led her to introduce Bamboo as an alternative textile in India.  Moreover, the bio-degradable element of bamboo and its ability to leave negligible ecological footprint as compared to factory manufactured textiles is UV protective and has proven anti bacterial properties. This concept was first demonstrated and introduced in the year 2003 at the 7th World Bamboo Congress.  Thereafter various experiments and fusions have been done with its integration with Khadi, cotton, chanderi and wool.  Today Madhu has refined the bamboo-yarn to precision and has succeeded in infusing it with silk ikat blend which is a first in the history of textiles.

Madhu’s efforts have also been directed at reviving traditions through sustained support for weaver livelihoods.  Towards this she has painstakingly worked with NGOs and SHGs in rural areas for ensuring markets for skills that are passed on through generation of cultural linkages and inheritances.  Madhu’s efforts at popularising traditional textiles have brought about a 500% growth in the Kalamkari sector.  Her interventions have also altered the landscape and supply chain of traditional textiles that could alleviate the problems of the artisans by insulating them from vagaries of fashion industry markets by ensuring steady volumes of work to the artisans.

Madhu Jain launched her first fashion label in 1987 to revive handlooms sector and thereafter she worked with BRAC Bangladesh for next two years in reviving Nakshi Kantha and reintroducing Dhaka Musin which has disappeared from India after partition.  Her works were showcased in Ms. World Pageant at Seychelles in 1997 where she had dressed up 15 contestants.  In 2000 Madhu became the Associate Designer Member of Fashion Design Council of India.  She launched Project M with noted film celebrity Milind Soman to take traditional Indian textiles onto the world stage.  This was made possible with her Kalamkari collection at Singapore Fashion Week. In 2004 she introduced bamboo based textiles at the 7th World Bamboo Congress and later in 2005 embarked on Kashmir Project to restore lifelines of local artisans by sourcing, developing, marketing and popularising Kashmiri design in Kashimri handicrafts which were later presented to four leading museums in New York.  Madhu then became Member, Culture Committee, South Asia Foundation that promotes understanding between SAARC nations through crafts and culture.  She has also won several awards and recognitions including Women of excellence FICCI FLO, Rajiv Gandhi Excellence award, India Eye International Human Rights Observers Women achiever award for her dedicated and distinguished work in promotion of indigenous forms of textile weaving and designing.
Madhu Jain has now been conferred the prestigious Nari Shakti Puraskar, the highest civilian honour for women for the year 2017.

[Government of India confers Nari Shakti Puraskar, the Highest Civilian Honour for Women in India on International Women's Day to acknowledge and recognize the services of individuals and institutions who make lasting contribution to women's empowerment. These awards are an effort to recognize role models who act as torch bearers for the younger generation and catalysts of change in the lives of women and society at large.]