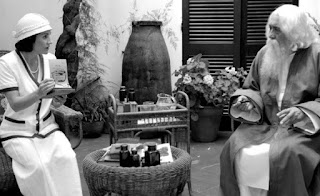 About the film by jpkallikkal

Thinking of Him is a film that transcends boundaries of time and integrates stories of the present with that of the past.  The film cascading between two different chronological periods, one set in the 1920’s and the other, in the present, unveils an intimate yet platonic connection between Argentinian feminine writer and cultural activist Victoria Ocampo and Indian Poet, thinker and Nobel laureate Rabindra Nath Tagore.

The central theme of the film revolves round Argentinian feminist writer and cultural activist Victoria Ocampo hosting Rabindra Nath Tagore in Argentina in 1924.  A deep platonic bond develops between the two and thereafter Victoria becomes a distant muse of Tagore which finds reflection in a book that Felix, a Geography teacher stumbles upon at a detention centre.  The book fascinates Felix as he is drawn deeper into the story of Tagore. As Felix gains understanding of the intellectual, emotional and spiritual tenets of Tagore’s revolutionary school in India, he decides to pay a visit India to explore and experience the true meaning and teaching style dreamed for whole of mankind by Rabindra Nath Tagore.
"I began pre-production in 2008 following a suggestion made by India's ambassador to Argentina. But I could not wrap up the film in time for Tagore's 150th birth anniversary as the research and funding process took longer than expected," says Cesar.

This 2017 Indo-Argentinian is Directed by Pablo César and produced by Pablo Ballester, Debendra Jagadala & Suraj Kumar.   Duration of this B&W/Colour film is 110 minutes and is dubbed in three languages: Bengali, Spanish and English.