Kerala Floods: Whose land is it anyway?

God’s own country, in deluge 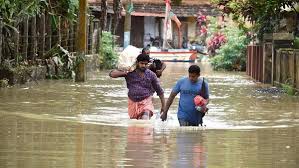 While the month of August 2018 brought out images of flooding caused by opening up of dams due to heavy rains in Kerala, while preparing to mark the first anniversary of floods this year, God's own country is yet again, deluged in rains that is far exceeding  the normal patterns of rainfall in the state.   This year, however, it is unprecedented landslides in hilly regions and washing away of huge tracks of soil that is taking its toll on people of this beautiful state in South India.

I translate and reproduce here, a portion of a write up, I came across in  Vadakancherry online, which reflects the reality on ground zero and exemplifies public reaction to natural calamities in the state reinforcing my faith in this land and its people.

“Henceforth no one should call it God’s own country!

What kind of land is this?

What kind of people live in this land?

Shopkeepers up the shutters of their shops and pack away entire goods for it to be distributed among the flood affected people of this land.

An infant who has lost his mother in floods is being breastfed by many mothers in the relief camp.

A mother, having lost all her belongings, cries inconsolably as she fears that her daughter’s wedding may get cancelled is promised 80 grams of gold by Feroz Kunnumbparabil and before Feroze could reach the camp, one Shan hands over required Gold to the hapless mother. A person named Bava Hameed sponsors the entire wedding expenses, Franko Sabaestian undertakes to cover wedding photography, some others help out in hosting wedding!

Mayor Bro connects North and South with his 50 loads of relief material.  Trucks carrying relief material are stopped on waysides and  drivers given tea and snacks by village folk.

Collector and district administration find it hard to contain the sea of youth volunteering to clean houses and provide human support to flood affected people.

What kind of land is this?

Do not call it God’s own country

This is land of Gods”

I have been following the pattern of rainfall and changes in geo spaces in Kerala for the past more than 3 decades.  While unnatural weather changes are being felt for the past one decade, it is since 2018 that Kerala is facing the brunt of natural calamities which it was fairly saved from for past several decades.

What is the reason for such an alarming situation?

I feel, five factors have broadly impacted Kerala, which now faces an imminent task of moving forward on the face of adverse human and natural intervention to its environment.

1.      Effects of global warming, al-nino factors leading to change in climatic and rainfall patterns
2.      Massive stone quarrying, tree cutting and sand mining leading to change in terrain patterns.
3.      Mammoth construction activities for commercial and residential use.
4.      Reduction of forest cover or covert activities like cash crop plantations, massive tree cutting in forest regions for commercial gains.
5.      Non implantation of recommendations of committees like the Gadgil report.
While Governments can help assuage sufferings of masses by official intervention and providing relief to those affected by natural calamities, it is the people, who bring about a difference to the way the calamities determine the course of public reactions to short term and long term measures in handling such contingencies.

Whose land is it anyway?

If we believe, it is ours, time has come for us to rise above narrow political and commercial interests to see to it that challenges arising out of  natural calamities occurring out of man-made and natural factors are seriously assessed and measures taken to plug disasters or reduce the sufferings caused by such occurrences. 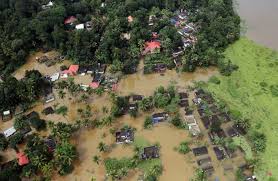